As watch releases go this is certainly one of the more unusual, though definitely equally as interesting as any other. Swiss manufacturer Blancpain has presented us with a limited-edition tribute to the classic Fifty Fathoms. The ‘No Radiations’.

Selected: Design Your Own Watch With BOOM

When we think of Sweden, iconic brands such as Volvo, Ikea and fashion powerhouse H&M spring to mind. Now I’am very happy to say there is a new one to add to this list, one which features sleek Scandinavian lines and a highly personal touch. This brand is BOOM watches.

The Luxury Of Cornerford Watches

If there is one thing here at The Gentleman Select I simply can’t get enough of its watches. They literally have a magpie effect on me, shiny little trinkets with coloured dials that you can accessories to the max. The trouble for me is in this day and age, a lot of them now seem to be very ostentatious, very bling and just tacky. This is then why Cornerford watches is the perfect gentlemanly wrist watch you need to get in order to really up your wrist game.

Swiss watch specialists Tag Heuer recently gave us the effortlessly cool and vintage looking Jack Heuer Carrera 80’s collection with two stunning options in black and a silver “panda” dial. The watch comes in a very modern 41mm size and a solid steel case which houses Tag’s Calibre 17 movement, one which can be found throughout the Carrera family and in Monaco models. Furthermore you also have the choice of a solid steel bracelet or the truly vintage look of the leather perforated strap and deployment clasp.

The watch tends to carry similarities of the dashboard dial of a vintage race car, a visual link to the original Heuer of the 1960’s and the Tag Heuer Carrera CH80 models with its side by side sub-dials, inner bezel styling and red writing.  Personally I like its classic, timeless look, evident in all Carrera models however I’am particularly fond of the two sub-dial set up instead of three purely for its simplicity and visual ease.

You can expect the limited edition collection to hit stores in November with a hefty 400 pieces hitting UK stores. If you want to add one of these sweet pieces to your watch collection you can expect to pay £4,000 on the strap and  £4,100 on the bracelet.

Caliber Straps Is A Colourful Alternative For Every Watch

Accessories for men and women are growing rapidly now a-days in all forms, shapes and sizes, from necklaces to handbags, and now most recently, watch straps. The latest cool accessory brand to come to our attention then is Caliber Straps, a colourful alternative for any watch, male or female.

The British brand is new to the scene however is growing rapidly in popularity with its vibrant array of colours which completely change the look of any watch you may have. The woven Perlon straps, a nylon material, are easily changeable in which we found they very simply looped through the spring-bars of our watch and boosted the  overall look of the watch beautifully. Comfort wise it was super smooth on the wrist with no discomfort at all in which the strap stayed nice and tight on the wrist.

Through their website you can see some truly bold colours which for us, will only go quicker as the summer comes around, colours which will look fantastic on the beach and even just now brightening up the dull winter months. For us this is the coolest watch accessory out there just now and we thoroughly suggest you check them out now at Caliber Straps.

Panerai have unveiled the latest addition to their ever growing catalogue of small-batch special edition watches: the PAM849 Sealand. The PAM849 is a 44mm Luminor 1950 in brushed stainless steel with a beautifully hand-engraved dust cover depicting Arabian horses riding through the desert. This special edition is limited to a run of 60 pieces and will only be available in Panerai Boutiques in the Doha Villaggio Mall in Qatar, and at Al Tahlia in Riyadh and Jameel Square in Jeddah, Saudi Arabia. The watch itself is powered by an in-house P9000 self-winding movement with 3 day power reserve and features a date window at 3 o’clock and small seconds register at 9 o’clock. The underside of the hinged dust cover is polished to a mirror shine and compliments the soft tone of the dial perfectly. Although not the first we’ve seen of its kind, it’s definitely a special addition to the Panerai portfolio and, indeed, to any fan’s collection. Retailing at AED 85,000 (approx. £15,500) its a little more expensive than your average Luminor, but worth every penny for a chance to sport such a work of art on your wrist!

‘The Gallery’ by Döttling

The latest creation to come from extraordinary German safe manufacturer, Döttling, allows you to admire the goods in your safe without having to compromise their security.

‘The Gallery’ is akin to their Bel-Air range with calfskin sides detailed with high-gloss nickel fittings, but with the addition of a 30mm thick armoured glass window in the door to allow you a quick look at what’s inside without having to shift a heavy safe door. The best part being that the window can be changed from transparent to opaque at the touch of button, for added discretion.

The interior is lined with the finest Alcantara leather and features 24 watch winders protected by a Döttling fingerprint security lock with the option of adding Touch & Move technology. There are also four drawers with black-stained Japanese Tamo Ash veneers, an extendable table, four secret compartments, and seventeen infinitely dimmable LED spotlights which impressively stage the treasures inside.

The Gallery by Döttling celebrates its world premier today at the grand opening of the prestigious De Gallery, Miami.

The Definitive List Of Every Watch James Bond Has Worn

With Spectre in the cinema’s breaking Bond box office records, it is safe to say everyone is talking about all things Bond related just now. What we always tend to notice is how Bond is always well kitted out, ready for any villainous situation he may encounter.

Through the years he has had suits from Anthony Sinclair, Brioni and Tom Ford, with cars from BMW to Aston Martin. One thing however James Bond has always been known for is his fine choice of time piece. Now thanks to the chaps over at watches2u.com, the ultimate Bond watch list throughout the years has been compiled. And its a good one.

It’s been a successful few years for the Tudor Black Bay. Launched in 2012 in Burgundy and then later in blue, the overall reaction has been pretty positive from watch lovers and Tudor fans alike. And it’s hard to miss why. Measuring at a reasonable 41mm in diameter, the uber retro dive watch ticks all the boxes for many: tough, reliable, and undoubtedly stylish. The watch itself feels modern and well built, but aesthetically it’s a nod to the early tool watches of the 50s, which for many, including us, is a major thumbs up.

The burgundy has always been a bit of a hot favourite with us particularly on the nylon NATO style strap, but the new addition has more of a subtle, safe, and wearable retro feel to it. The warmth of the rose coloured hands and numerals give it a really classy elegant feel while the red triangle at 12 o’clock ticks that “homage” box for many fans and vintage aficionados. I think it’s safe to say this is about as close to a “Big Crown” homage as we’ll get! Interestingly, it bears a striking resemblance to the Tudor Black Bay being auctioned at Only Watch 2015. Like its brothers, the 79220N also comes on that beautiful aged leather strap as well as a steel bracelet. And selling at a very reasonable £2,330 on a bracelet, you can have a very wearable, vintage style watch without breaking the bank.

To anyone even slightly horologically literate, the name Patek Philippe means a great deal. Not only are they the last family owned watchmaker left in Geneva, but they quite possibly manufacture the finest watches money can buy. 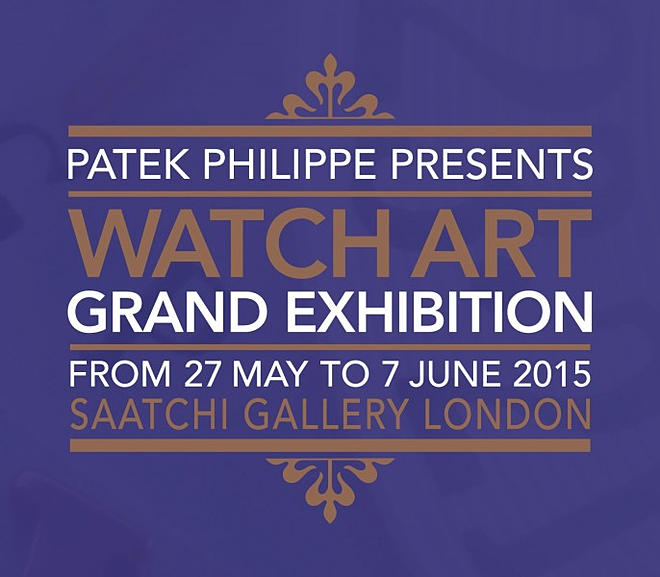 May 2014 marked the company’s 175th Anniversary and, as such, a year of celebration began. October 2014 saw the launch of several highly exclusive anniversary pieces created in limited numbers including the incredible Grand Master Chime, the brands most complicated wristwatch yet housing 20 complications over two neighbouring dials. Like many we can only dream of owning one of these watches, however in May of this year Patek decided to hold a Grand Exhibition to round off their year of celebration, giving many the chance to view some of their most impressive horological achievements along with rarely seen watchmaking artifacts of incredible historic importance. And the best part?, free admission to all!.

Held in the beautiful Saatchi Gallery in London, the exhibition attracted some 40,000 visitors in just under two weeks. It was the largest of its kind, and spanned 21 rooms – each more impressive than the next. 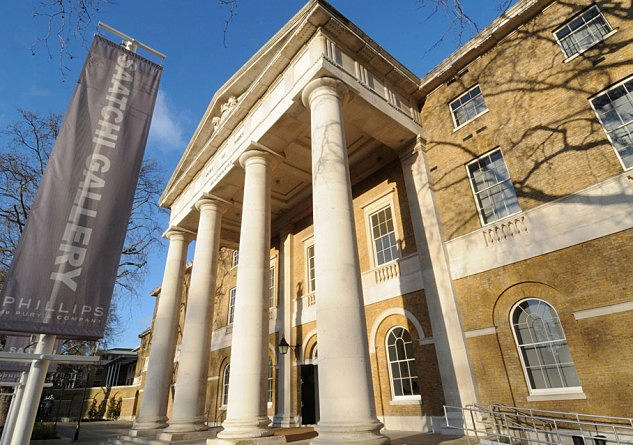 The first room we visited was the Royal Room, displaying watches owned by Queen Victoria and even the watch currently owned by Her Majesty Queen Elizabeth II, who graciously gave her permission to have the watch for the purpose of the Grand Exhibition. 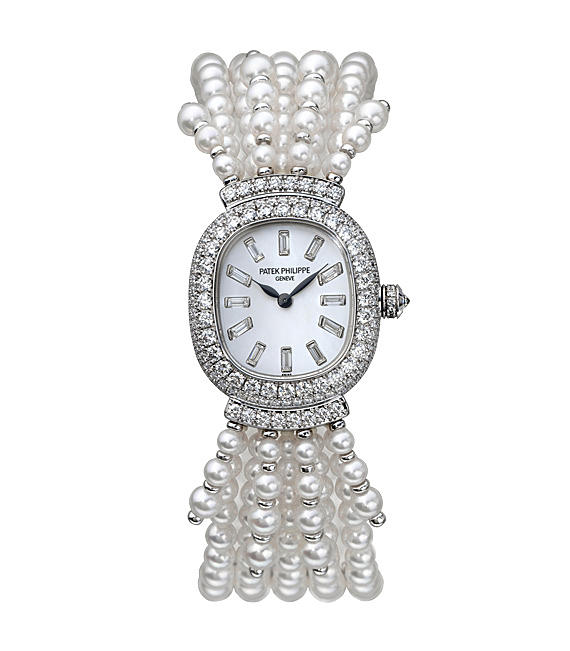 Other rooms contained more historic pieces, which was perhaps our highlight of the trip. We were able to view pieces shipped directly from the Patek Philippe museum, and some even plucked directly from Thierry Stern’s private collection. Viewing included Antoine Norbert de Patek’s watch; the first wristwatch manufactured by the brand, sold to a Countess of Hungary in 1868; and a tableclock in the shape of a birdcage, home to two birds who sing along to music while jumping from post to post. There were so many marvels of engineering and technical innovation showcased across the exhibition, however none caught our eye quite as much as the Birdcage tableclock. It’s important to remember that this piece is entirely mechanical and pre-dates electricity by almost five decades. 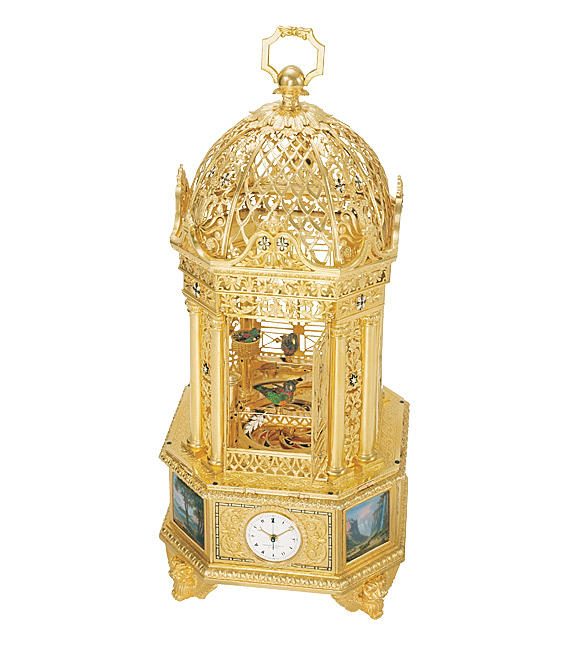 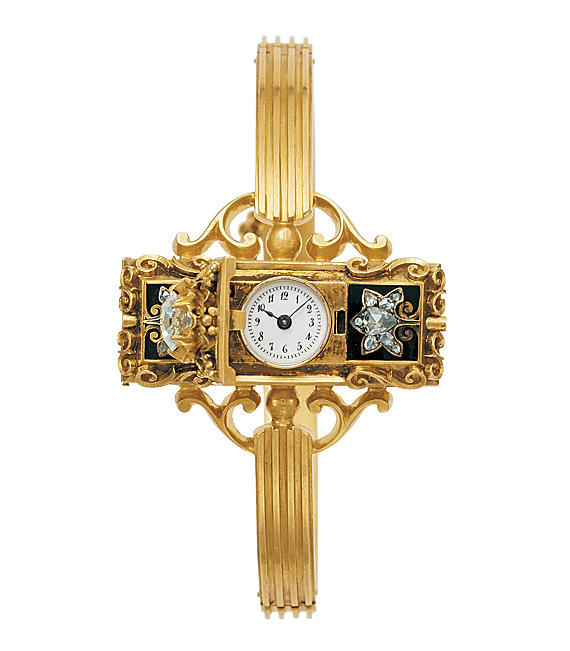 Moving on to the Rare Handcrafts, and the Complications Rooms we were treated to a plethora of toubillions, minute repeaters, celestial complications, handcrafted enamel pieces, and everything manufactured in what Patek call the “Realm of the Extraordinary”. And extraordinary it was. In fact, having considered the time taken to manufacture just one of these pieces, there was undoubtedly generations worth of man hours and pain staking craftsmanship spread across not only these rooms but the entire exhibition. Proof of this was evident in the Rare Handcrafts and Artisan’s Room, home to a few enamellers and engravers who very kindly allowed us to gaze annoyingly while they shared their trade with us – for many taking decades to master. 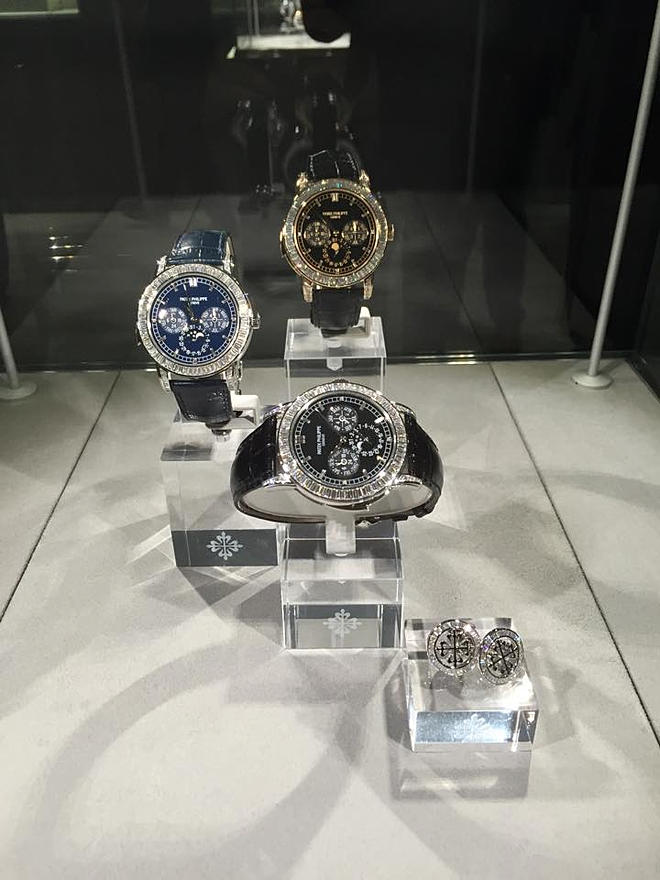 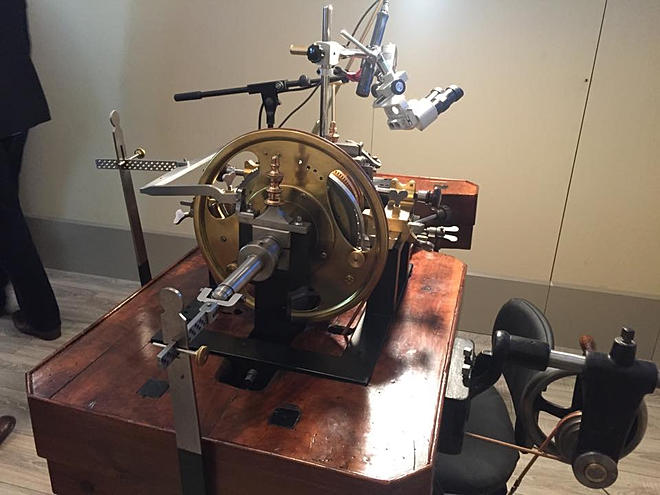 Finally, we came to see what for many was the piece de resistance: The Grand Master Chime. Housed in its own little glass tower, and only to be viewed by five at a time, the Grand Master Chime is indeed a sight to behold. Hand engraving the case alone takes upward of 200 hours and is completed correctly on the first try! Add that to the mind-blowing complication comprising 1366 components, developed and constructed over seven years, there’s no wonder why you’ll pay upwards of £2,000,000 for the privilege of owning one of seven pieces to be made. 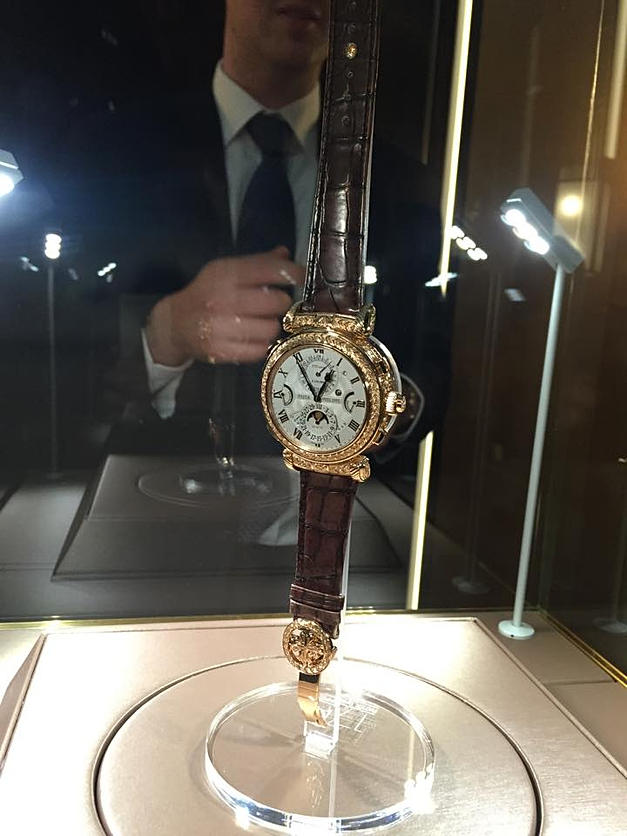 Unfortunately, the opportunity to achieve complete watch nirvana has all but passed. Perhaps we can wait with exitement for it to return on their 200th anniversary! Only time will tell, but one thing’s for certain – it’s worth the wait.