As the hugely popular SUV market continues to grow, so does the wonderful range of vehicles South Korean manufacturer Kia has to offer. This month here at The Gentleman Select I was lucky enough to test drive Kia’s newest addition, the XCeed, around the very cool streets of Berlin.

Everyday, anniversaries are celebrated throughout the world, and every so often, one comes round which is truly special, worth stopping for and admiring. This year of course we celebrate automotive manufacturing perfection with 50 years of Mercedes AMG.

Anyone who knows cameras, even vaguely, knows or has heard of Leica. The Leica M has be adorned by photographers the world over since 1954 and so excitingly, Leica has presented to the world the M Typ 262, the pinnacle and only starter camera to have in your bag. The M Typ 262 is presented as the most compact, full-frame system camera on the market containing that beautiful vintage look yet exceptional tech and image quality Leica users have grown to love. Added to the top is now an aluminium plate which reduces the camera’s weight, with functions like Live View and video capability being discarded in order to bring in a streamlined, photo-centric experience for its user.

Features wise on the Leica you can expect a high-res CMOS full-frame sensor of 24MP, reduced logo size and the introduction of a step at the end of the top plate which harks back to the M9 model. The M Typ 262 will be available from the 25th November and will set you back around £4,000, truly worth it and truly an investment piece.

With Oktoberfest in full swing, we have something which will wet your appetite besides a refreshing beer, so don your lederhosen and roll out a few kegs as BMW have unveiled a wonderful BMW M3 Oktoberfest themed car, in conjunction with the worlds biggest beer festival that is currently in full swing.

Of course we must mention this is not the first time we have seen a BMW Oktoberfest themed car. We can leap back to 1981 were at the time, Munich restauranteurs were financing and promoting a BMW M1, the legendary car designed by Giorgetto Giugiaro and co-developed with Lamborghini, to compete in the Le Mans 24hr race. The designs on this car were hand painted showing local restaurants whom were sponsoring the project, to historical figures and the recognised white and blue cord, even the BMW factory itself made an appearance.

Beautifully this has been carried on to the latest BMW M3 project, seen again is the blue and white cord, Munich landmarks such at the Olympic stadium, the quintessential beer tent, even the Frauenkirche has its place on the body work, all wonderfully hand decorated by Walter Maurer, the original artist for the M1 project and practitioner of Cubism and Expressionism in Germany.

The festival itself runs until the 4th of October were the one off masterpiece BMW M3 “Munchner Wirte”  is on display at BMW Welt in Munich for all you lucky folks traveling over there to go and see. We trust however you don’t need any other reason to hop along and try some of the finest beers the world has to offer.

Doettling: The Best Safe’s In The World

When we think of a safe, immediately a giant lead box, or the small digital one you find in your hotel room on holiday springs to mind. Never something we would consider a work of art anyway. That is because many of us are completely unaware of one particular German safe maker called Doettling. Put simply these safes are a mechanical palatial masterpiece, the pinnacle of metal craftsmanship.

Founded in 1919 in southern Germany, a region famed for mechanical ingenuity in its own right with names such as Mercedes Benz, Porsche and Bosch still based around the area today, these German landmark companies Doettling say act as both their inspiration and motivation. Currently the company is in its fourth generation in which they continue to build and restore safes with elaborate craftsmanship and passion like nothing you have ever seen.

We will throw you straight in with a safe quite literally fit for a king. Built in 1872 by the Morosini brothers in Milan, it was said to be commissioned by Victor Emmanuel II who ruled in Italy from 1861 to 1878. The royal origins of the safe are visable through the ornate brass fittings on both inner doors of the safe, culminating with the royal coat of arms of the House of Savoy, including crown, at the top. What is more fascinating was the safes functionality with its heavy bolt mechanism, despite being exceptionally opulent and highly decorative in its design. It was functional in the sense as well that according to decendants of witnesses at the time, it was used by the king to store love letters and memorabilia from his mistress and soon to be second wife Rosa Vercellana. Looking closer at the safe there is a nod by the Morosini brothers towards this amourous relationship with some beautiful detail on the inner doors, an engraved rose surrounded by a heart shaped crest which opens upwards, smartly linking then to the lady herself with Rosa meaning Rose in Italian.

To date how the safe found its way to southern Germany, were it was rescued by Doettling following a house demolition, remains a mystery. What can be said is that they have done the most beautiful job in fully restoring it to its radiant royal form which in actual fact, is ready to grace the home of a discerning connoisseur should you wish to purchase it.

Doettling not only restore safes back to their original form, they also create their own metal masterpieces. The latest creation from the house of Doettling is called “The Chest”. This stunning example is part of Doettling’s “Miniature Vaults” collection which deliver on style and performance as much as their restoration projects do. This particular safe was inspired by the Italian and French Tresor masterpieces of the late 18th century and although vintage in appearance, is as modern as you like with a fully functional boltwork and double safe lock. The finish on “The Chest” is truly beautiful using only the finest materials, nubuck calfskin which has been braided and patinated before finishing with large panhead nails to produce an almost pirate-esq, aged appearance.

Within the safe it is very tech savvy indeed. From the two options available you will find either four precision watch winders within “The Chest-8” or five within the two door “The Chest-15” complete with cushions to keep the watches secure on. Personally my favourite part is the optional GPS tracking device that allows pin point positioning should the safe be stolen, that is of course if said thieves can lift it, and are not deterred by the deafening alarm systems which sounds should “The Chest” be maliciously removed.

For me what is so refreshing about Doettling, even in this modern era of daily advancing technology, is that the company still works very traditionally by hand through their passionate restorers, locksmiths, goldsmiths, painters and upholsters who meet individual customer requests in a unique, tailor made way. Doettling are a company which represents a symbiosis of absolute technical perfection and consistent, timeless, elegant design. We have only just grazed the surface of what you can expect from the German maestros so I suggest you hurry over to the website to get a full look at their marvellous creations both past and present.

BMW enthusiasts and car nuts alike will be pant wettingly excited at the revealing last weekend of the 3.0L BMW CSL Hommage at the concours Villa d’Este 2015. The CSL or Coupe Sport Leichtbau (coupe, sport, lightweight) of the 70’s was a car which wowed, reducing the weight of the orginal 3.0 CS by 200kg through the use of aluminium and plexiglass. Enter then this stunning modern take on an old classic which is truely awe inspiring indeed. 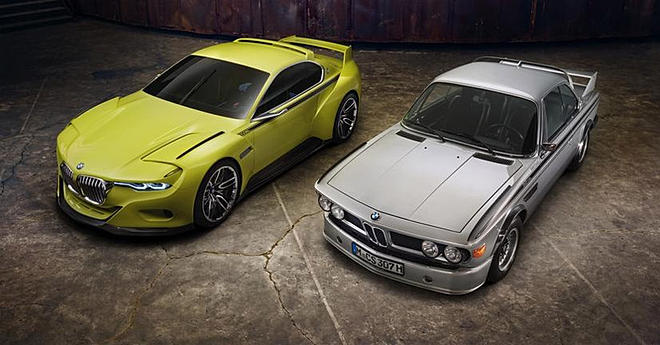 Firstly we must point out at this stage that the CSL Hommage is only a concept, however it is a fully operational concept so we can at least pray it goes to a production stage, at least limited edition. It is an exquisite sports coupe in a bold yellow colour which draws upon many features of the orginal 1970s model, most notably the air deflectors along the bonnet and the roof spoiler coupled with that huge whale tale. My personal favourite is the small, simple touch of the BMW badge on the back wing. Truly harking back to the classic indeed. 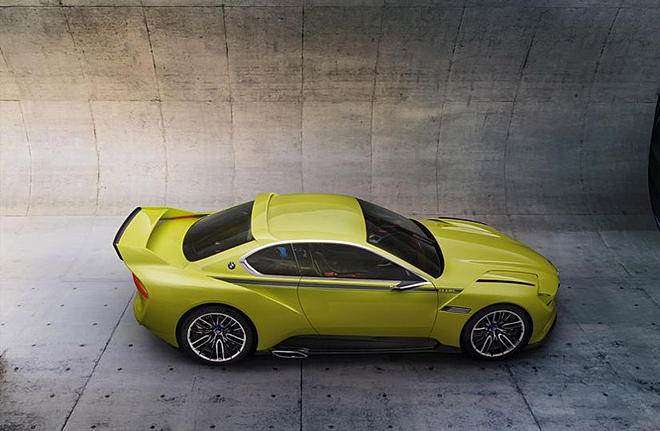 Although the CSL Hommage houses a 3.0L engine, it stays true to its modern birth with a hybrid eBoost energy system, a smart system at that which stores un-used power to a point which the driver may need that extra kick when for example over taking. The eBoost also influences space within the cockpit of this road going space machine reducing it to two seats in order to fit the hardware needed for it to work. 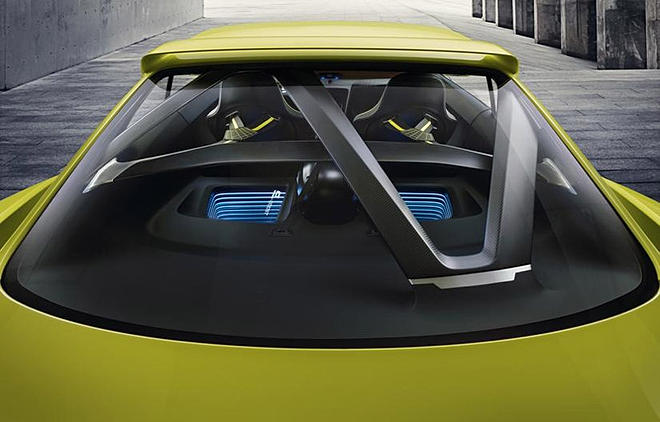 On the subject of the cabin itself, it certainly does reflect a cockpit with a super modernistic steering wheel and a minimilistic dashboard to match. Again it reflects back to 1970s CSL however with a wood finish emblazoned across it. The seats capture that old racing heritage being quilted carbonfibre buckets with a six point harness which secure you in for the experience ahead. 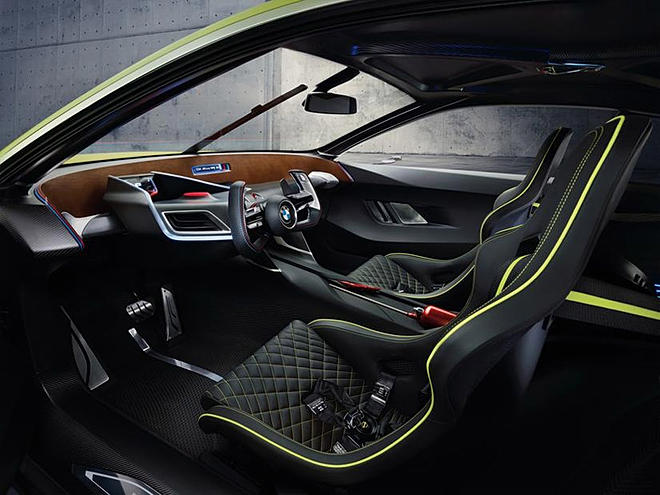 For us it is a stunning tribute to an old legend and another beautiful Munich masterpiece. We will leave you then with the final words of senior vice president of design at BMW, Mr Adrian Van Hooydonk for his take on proceedings.

‘Our Hommage cars not only demonstrate how proud we are of our heritage, but also how important the past can be in determining our future. The BMW 3.0 CSL Hommage represents a nod to the engineering achievement exemplified by the BMW 3.0 CSL in its lightweight design and performance. With intelligent lightweight construction and modern materials, the 3.0 CSL Hommage brings the character of that earlier model into the 21st century, showing it in a new and exciting guise.’

There has been a problem with your Instagram Feed.