About Us, Miscellaneous, News

The MINI John Cooper Works is a car synonymous with performance and practicality rolled into one. Throughout the years the models and competition have progressively grown in prowess so it is important the old boy keeps himself, and his class rivals on their toes in the current consumer market.

This year then MINI has done just that by unleashing the 2015 JCW, the fastest and most powerful model yet. Being a thoroughbred racer at heart, we sought no better proving ground to test this than on a track environment round Brands Hatch were we could really put it through its paces. On immediate entry to the cockpit there are some stunning additions which really set this car off. I was drawn straight to the start stop button in the middle console, and the longer, uncovered gear stick on the manual which gives a racing sequential-esq appearance to the inside. A key aspect which i feel previous JCW and JCW GP owners will pick up on is the smarter seats. By smarter i mean instead of all leather in the older GP for example, the new JCW houses a mixture of leather and suede material in key points, which most importantly, stop you sliding off the seat should you corner a little to hard. Once you belt yourself in you find characteristics of BMW technology appearing in the new head-up display feature which is extravagant and for me, less distracting than having to glance across the dashboard to check your speed every few seconds. 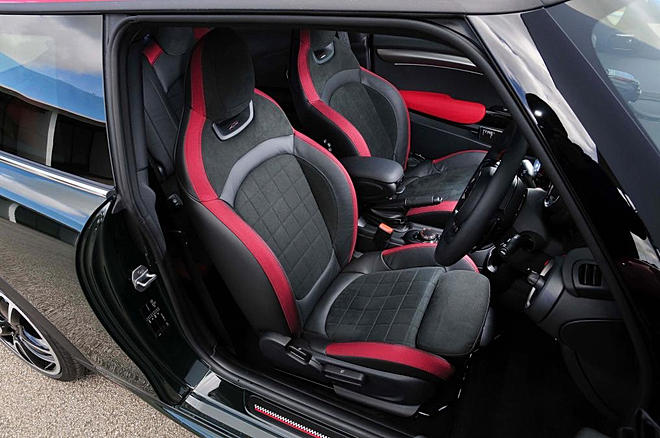 As soon as I set off, the feeling that you are in a different animal from previous models was very evident indeed. Firstly from that lovely exhaust note as you start up, achieved through a larger however thinner construction to save any additional weight. What it did add in extra however was a caressing snap, crackle and pop of the turbo as you drop through the gear box on bends. 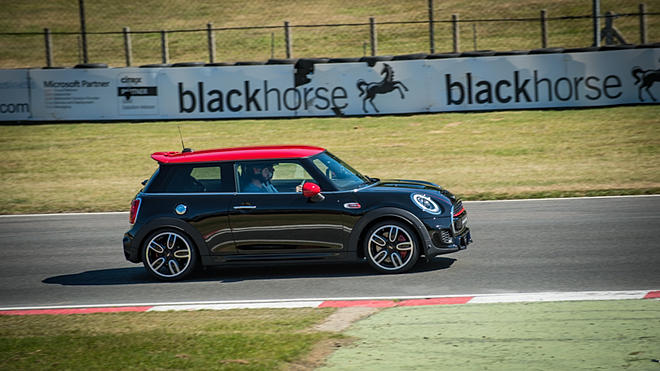 The JCW performance overall is now upped to a sizzling 231bhp with a 0-60mph time of 6.3 seconds seeing 153mph as the top end speed, truly figures which will see it and the likes of a main competitor in the Audi S1 lock horns. As my confidence gradually grew on track so did my smile as you get a true sense that the little MINI keeps you on edge, throwing a little understeer at you in the bends, which with a little lift of the throttle, allows you to counter this displaying the agility of the cars back end, letting it follow the nose, and nail the throttle on exit of the corner. 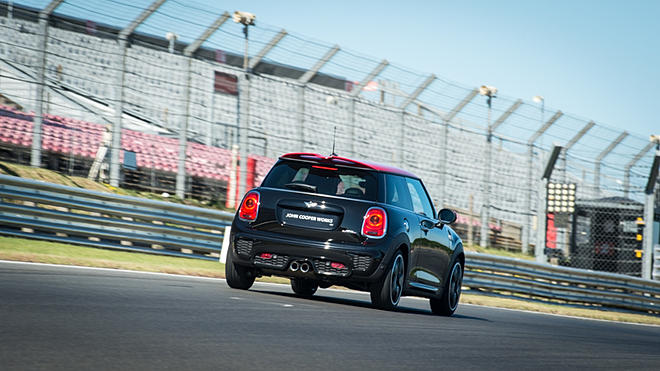 The fantastic thing is this car has the backing of one Niki Faulkner, famed for his wealth of experience on Top Gear and most recently, blockbuster films Kingsman: The Secret Service, the forth coming Mission Impossible 5and Rush. Speaking to Niki I got a real sense of his true passion for motoring and specifically this MINI project. “When I was approached by MINI, I agreed to test the car initially and it was fantastic. I wouldn’t put my name and time towards something that I didn’t get that true driving experience and excitement from”. Niki went on to say of his involvement with director Ron Howard on the set of Rush. ” Ron gave me brilliant flexibility to really inject a huge amount of detail into the film, enough detail which would keep the true motor racing anoraks happy, yet relative so as the audience with less racing knowledge could still get truly involved in the film”.

From what Niki said, detail is what the new MINI JCW is all about. It is a car which is a charismatic blend of a new era hot hatch, racer, as close as can be without having the childs play frame set-up in the back, yet comfort and stability is not sacrificed in pursuit of that with all the standard air con, electric windows and rear seats. For me it is a wonderful all round car which ticks all the boxes and fuels that primeval desire in us all.

We fully reccomend you visit WWW.MINI.CO.UK or pop in to your nearest dealership now to get involved in the mini experience.

About Us, Art, Horology, Miscellaneous

90 years have passed since Peter Bang and Sven Olufsen presented their AC Radio to the world. So what better way to mark an anniversary than with six of their current audio visual pieces emblazoned in Gatsby esq rose gold.

In my personal opinion there is an emerging trend for rose gold and copper tones in household items this season. There is a true feeling of warmth which directs us away from the over used cold chrome look. This in turn is why I feel Bang & Olufsen has got it spot on.

Achieved through a unique dying process, the romantic rose gold colour captures a by gone era of exhuberance with hints of wood included too. This I feel gives the home owner a very flexible object which will really stand out in any room. For me the collection really does work on all levels and stands as a fitting testiment to the passion and craftsmanship that has been put into Bang & Olufsen equipment over 90 years.

The collection itself will range from the classic Beo Play H6 headphones, to the elegant and personal favourite Beo Lab 18 speakers which again look stunning in said rose.

About Us, Art, Horology, Miscellaneous

As we roll into March so it takes us another month nearer to festival fun and hopefully, some hot weather to go with the top line ups on show.

The choice of what to wear tends to have  the same importance of what alcohol to take, thus to ease your dilemmas look no further than H&M and their Cochella based clothing line.The Swedish brand have sponsored the Coachella festival in California for the past six years now, a partnership which has now been translated through these designs.

Aptly titled H&M loves Coachella, the line reflects the festival spirit through pieces like its acid wash t-shirt and a quirky cactus print vest as a personal favourite. The line will launch at the festival itself next month however we can expect it to hit our shores much nearer the end of March.

Of course this gives us then plenty of time for the weather to improve for festival season should we be donning any cactus print vests in Old Blighty this year.

About Us, Horology, Miscellaneous

As soon as this title is read the first thought that pops into most people’s head is the Balearic gem of Ibiza, however in this case you would be very much mistaken.

Set to rival our favourite little Mediterranean hotspot is somewhere twice as hot and twice as sandy.  Come 2018 we expect a fully fledged party island situated just outside Dubai running 24hrs of partying madness. The titled “Dream Island” will be set to boast space for 20,000 revellers who will have the option of two mega clubs, four beach bars, five hotels and 100 restaurants.

Navigating strict alcohol policies of the Middle East is also dealt with through its location of Ras Al Khaimah in UAE meaning no license is required to purchase. The true intentions of this hedonistic island are expressed through sales and marketing director George Saad:

“We’re trying to make it the new Ibiza – a mini Ibiza dedicated solely to partying. People will be able to come here, stay in the hotel party at clubs on the beach, anything in the world you can do… And we are trying to attract festivals to come here – like Burning Man.”

There is no doubt then that it is a truly fantastic spectacle in the planning however the biggest question that all partygoers will have is will this replace Ibiza as the go to party destination?

Only time will tell on this.

About Us, Horology, Miscellaneous

When we talk about handmade, tailored items, we enter the realms of yearly salary prices and very long waiting times.

Enter then Meermin Shoes from Mallorca.Since 2001 this shoemaking dynasty have sought to deliver handmade shoes at a reasonable price for customers. I for one love their craftsmanship and I feel their varied range of tasseled loafers for the summer, to a very James Bond esq Skyfall boot for winter, really does cater for all.

Recently they have ventured into producing accessories with a new wonderful range of belts to pair with said shoes rangeing from Balearic tans to dark brown museum calf, colours that really do compliment an outfit.

This then brings me back to Meermin’s key selling point in their fantastic price for a stunning pair of handmade shoes which is sure to set you apart from other chaps in the bar or office, without denting your bank balance.

In an era of daily banking shenanigans, who better to exploit this mess than the work of one Alec Monopoly.

My love of Alec’s work has been growing for a while now and has never been more relevant than in our current banking climate. His main muse, the “Top Hatted” rich uncle pennybags of the Monopoly game, with appearances from Scrooge McDuck and Patrick Bateman, really pokes fun at the banking misguidance of today.

Named as one of the most searched artists of 2014 by artnet.com this graffiti artist’s work in vibrant colours is sure to grow further this year with an array of celebrity followers in tow.

Key piece: Christian Bale as “Patrick Bateman” with his blood soaked face. Check him out at: